What Inequality Means for Our Children 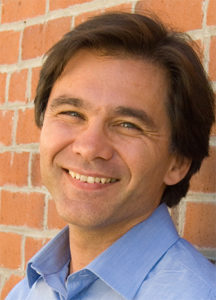 In January, Miles Corak, a renowned economist and inequality expert, will join the Graduate Center as a faculty member in the Economics program and as a senior scholar at the James M. and Cathleen D. Stone Center on Socio-Economic Inequality.

He comes to New York from Canada, where he is a full professor of economics at the University of Ottawa and the economist in residence at Employment and Social Development Canada.

He spoke about his work and new role.

You’re best known for your research on how inequality influences opportunity. Why is this issue important, even urgent?

Equality of opportunity — the idea that all citizens have the capacities and resources to become all that they can be regardless of their family background — is one of the fundamental building blocks of a vibrant democracy and a well-functioning economy. It is certainly central to the American Dream. But at the same time it is also an outcome of our politics and economics. It is increasingly important to understand how inequality casts its shadow over opportunity because inequalities of income, wealth, and political voice have grown so much over the course of the last generation or so.

Can you talk briefly about the Great Gatsby Curve that President Obama helped publicize? What are the primary takeaways from the curve?

The Great Gatsby Curve entered public policy discourse in 2012 when Alan Krueger, the Princeton University economist, coined the term in a speech during his tenure as chair of the President’s Council of Economic Advisors. It refers to the cross-country relationship between inequality at a point in time and the degree to which it gets passed across generations.

It turns out that the United States sits at an end of the curve with high inequality and a high degree of stickiness between the adult income of children and the incomes of their parents.

Corak’s so-called Great Gatsby Curve (above) drew the attention of they Obama Administration.

The Great Gatsby Curve has proven to be a great communications device, drawing policy attention to the fact that high inequality can’t be justified because it is paired with high mobility; the fact is just the opposite. And it draws our attention to the whole host of transitions children must make on their way to becoming successful and self-sufficient adults, with higher inequality giving those from advantaged families a head start, while at the same time raising the challenges faced by those from less advantaged families.

What are you most looking forward to about working at the Graduate Center?

The Graduate Center, indeed the CUNY system, has been shown to be a leader in promoting upward mobility, in offering opportunities to New Yorkers and others that opens up paths to enriching futures. It may appear a bit ironic that this is the very topic of my research agenda, but it is no accident. I look forward to being part of and contributing to this mission. I’m particularly excited to get to know the students and my new colleagues in the Department of Economics and the Stone Center on Socio-Economic Inequality.

What do you bring to the Graduate Center as a teacher?

I hope I can bring at least two things. I would like students of labor economics to appreciate the importance of a careful and rigorous training in their discipline, one that includes both theory and statistical practice. But I would also like them to appreciate the importance of engaging in a constructive conversation with researchers in other disciplines, and with the public policy community.

Of all the studies you’ve done and the articles you’ve written, do you have a favorite? Why?

Oddly, I’m not certain I look at my research in that way, as distinct studies. Rather, I see them all as part of an ongoing conversation, with one published article partially answering a question but leading to other questions, with a continual chipping away at a series of problems. I suppose if I had to point to one article, it would be a paper published in the Journal of Economic Perspectives called “Income Inequality, Equality of Opportunity, and Intergenerational Mobility.” This article was an attempt to stand back, to partially synthesize the work I had done and what I learned from others in a way that drew timely lessons for a broader readership.

Most definitely it will. While I look forward to continuing my engagement in Canadian issues and public policy, being in the U.S. will offer me new colleagues, new contacts and networks, new resources from which to draw, and new concerns. I look forward to this, and particularly to being actively involved with the Stone Center, which has already established itself as a hub for data, research, and conversation.

Affiliated Scholars join the Stone Center from universities and intuitions around the world to collaborate with our distinguished team, participate in events, and disseminate their research.

By Category
By Tag